Justice David Oladimeji of an Osun State High Court sitting in Osogbo has declared that it would be inequitable not to allow Senator Ademola Adeleke, the candidate of the Peoples Democratic Party in the September 22 Governorship election in the state, not to show his school leaving certificate to court if he has any.

The court therefore gave the Senator the opportunity to present his certificate before the court by Wednesday, August 1, 2018

Rasheed Olabayo and Oluwaseun Idowu had approached the court claiming that Senator Adeleke did not possess Certificate as required by Section 177 (d) of the 1999 constitution.

The applicants asked the court to set aside the July 21st, 2018 primary election which produced him as the party’s flagbearer.

While ruling on the ex-parte application filed by the duo members of the opposition party on Thursday, Justice Oladimeji explained that granting the leave to restrain the PDP from presenting Adeleke as its governorship candidate over his inability to present his certificate may subject the court to mockery if the Senator presents the certificate thereafter. 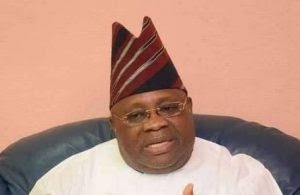 According to the judge, “It will be inequitable not to allow the respondent to come and show his certificate if he has any but if given the opportunity to present side of the case, the balance which is necessary for interlocutory injunction would be adequately considered.”

Justice Oladimeji explained further that the ex-parte injunction has only seven days lifespan and that there were still window left open till August 8 according to the affidavits sworn to by the applicants.

He said “being an election matter, it is my conviction that the public will not be uninterested in the proceedings of this court. Once a matter is before a court any party cannot take a further step without the express permission of the court”.

The matter was adjourned till Wednesday, August 1, 2018 for definite hearing.

Title : Show Your Certificate To Court If You Have Any – Court Tells Ademola Adeleke
Description : Justice David Oladimeji of an Osun State High Court sitting in Osogbo has declared that it would be inequitable not to allow Senator Ademola...
Rating : 5
Related Posts: freebeat, Music, News, Video