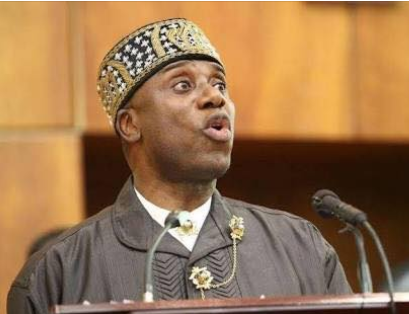 The Peoples Democratic Party (PDP) has counseled the Minister of Transport and Director-General of President Muhammadu Buhari’s re-election campaign, Rotimi Amaechi, to face his luckless task of marketing a bad product and stop arrogating sainthood to anybody, as Nigerians now know the real champions of corruption in the country.

PDP National Publicity Secretary, Kola Ologbondiyan, on Friday, said it was completely incongruous for the minister to state that corruption will return in Nigeria if President Buhari is voted out of office, when he knows that the Buhari administration is swimming in an ocean of corruption.

The party challenged Amaechi to name one corrupt person in the repositioned and reoriented PDP and the PDP will hand him the dossier of officials in Buhari’s administration including former state governors, who looted their states, but are now being protected by the Buhari Presidency simply because the APC government is a haven of corrupt people.

It said unlike the PDP government that openly fought corruption, exposed and prosecuted its officials, the Buhari Presidency, on its part, is providing cover for heavy sleazes in critical sectors, resulting in the collapse of the nation’s once robust economy.

It is unfortunate that Amaechi and others like him are yet to come to terms with the fact that Nigerians now know that the APC deceived them into believing that they were saints while others are all corrupt, and as such ready to square the APC a reprisal in 2019.

Amaechi’s approach is typical of an overwhelmed salesman of a rejected product who must engage in a shouting bout to gratify his desperate paymasters.

By trying to reenact the outworn APC propaganda of tagging others as corrupt while vainly posturing as saints, the campaign director has not only exposed their disdain for Nigerians but also the fact that the Presidency and the APC are now mortally afraid of the repositioned and re-oriented PDP ahead of the general elections.

PDP therefore challenge the minister to address the nation on what the Buhari Presidency has done about the allegations by the Rivers state government that he frittered away funds meant for the development of the state when he was governor.

What action has the Buhari Presidency taken about allegations that former APC governors, including his campaign director, allegedly stole money belonging to their states to fund his 2015 presidential campaign?

What has this minister to say on the failure of the Buhari Presidency to act on the leaked memo showing corrupt oil contracts at the NNPC to the tune of N9 trillion ($25billion dollars) in a sector under President Buhari’s direct supervision as Minister of Petroleum?

What has the minister to say to the fact that the Presidency has continued to provide cover to officials involved in sneaky oil subsidy deals and alleged diverting of N1.1trillion worth of crude last year to service APC interests?

What about the cover provided for corrupt cabinet ministers including those indicted for extorting funds from parastatals under the guise of loans, those found to have corruptly enriched themselves, the mainagate as well as the recall by the Presidency of the suspended Director General of the National Health Insurance Scheme while he was still being quizzed by the EFCC?

Instead of their posturing, the APC and the Buhari Presidency should rather be remorseful and stop wasting their time as nothing will make Nigerians change their minds about voting them out of office come 2019 in favour of the repositioned PDP.