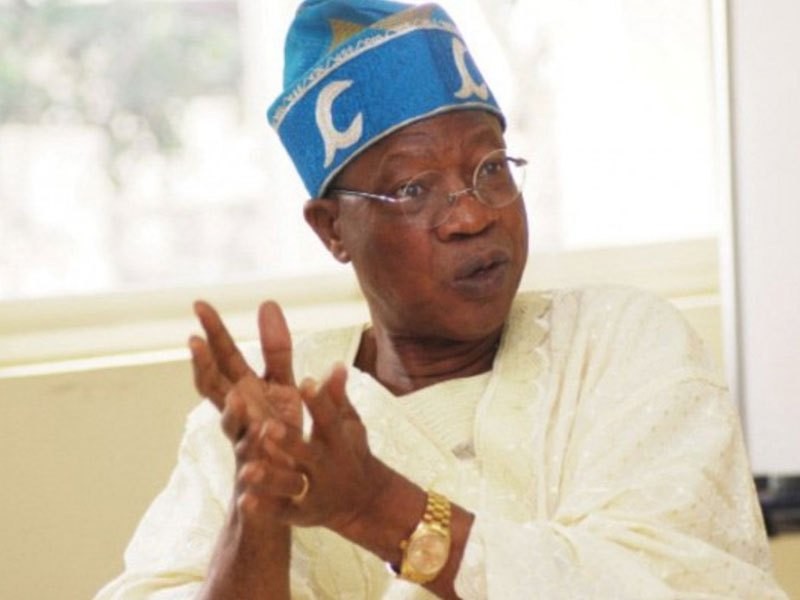 The Minister of Information and Culture, Alhaji Lai Mohammed, has said
that with President Buhari piloting the affairs of Nigeria, the country is in very safe and competent hands, hence there is no cause for alarm.

The Minister said this at a mini town hall meeting with the staff of the Nigerian Embassy in Madrid, Spain, and a cross section of Nigerians living in the European country on Saturday.

He said contrary to the fake news being peddled on the Social Media, Nigeria is making steady progress, especially in revamping the economy, tackling insecurity and fighting corruption - the three cardinal programmes of the Buhari Administration

''Don't believe everything you read on the Social Media. Nigeria is
neither at war nor in crisis,'' Alhaji Mohammed said. ''Contrary to
what you may be reading on the Internet, the Buhari Administration is
putting Nigeria on a solid footing, after the years that were eaten by
the locust.''

He said naysayers are spending millions of Naira to distort the true
situation of things in Nigeria and to make the Administration
look bad.

''It is said that if you don't know where you are coming from, you
won't know where you are going,'' he said, listing the drastic fall in
the price of crude oil, the low foreign reserves at $24 billion, the
fact that the federal government was borrowing to pay workers'
salaries, and the fact that many states were unable to pay salaries as
some of those challenges.

Alhaji Mohammed also said when the Administration came into office,
unpaid pensions had run into billions of Naira in many states,
contractors had abandoned sites across the country because they were
being heavily owed, infrastructure was in poor state, power generation
was 2,690 megawatts, billions were being paid as 'fuel subsidies'
to fat cats, corruption was the order of the day, while 20 of the 27
local governments in Borno were under the firm control of Boko Haram.

''Today, the trend is being reversed, and the results are showing:
Foreign reserves is now $42.8b, the highest level in four years,
inflation has fallen for 12 consecutive months to 15.13%, 108 billion
Naira has been saved from removal of maintenance fees payable to banks
before Treasury Single Account (TSA), the nation is being saved 24.7
billion Naira monthly with the full implementation of the TSA and the
elimination of ghost workers has saved the nation 120 billion Naira.

''With improved macro-economic conditions, capital inflow is on the
upswing, reaching $1.8 billion in the second quarter of 2017, which is
almost double the $908 million in the first quarter, Nigeria’s stock
market is one of the best-performing in the world,
delivering returns in excess of 40 percent, Nigeria jumped 24 places
on the World Bank’s Ease of Doing Business
ranking, and earned a place on the List of Top 10 Reformers in the
world,'' he said.

The Minister also told the meeting that the Administration's
agricultural revolution is moving Nigeria close to self-sufficiency in
many staples, especially rice, that the home-Grown School Feeding
Programme has created jobs for 61,352 cooks, and it is providing 6.4
million school children in 33,981 schools across 20 states with one
meal a day, that power generation has increased to 7,000 megawatts,
that Boko Haram has been massively degraded and that the
Administration's is embarking on a massive infrastructural renewal.

Alhaji Mohammed, who urged the Nigerians to download the FGN-iAPP in
order to get authentic news from Nigeria, later fielded questions from
the Nigerians, with many of them seeking to know when Nigerians in the
diaspora will be able to vote, how they can access the national
identity card, how they can get authentic information from Nigeria and
what the federal government is doing to end the herder-farmer clashes.

Nigeria's Ambassador to Spain, Mrs. Susan Aderonke Folarin, led the
staff of the embassy to the town hall meeting, which was held at the
embassy premises.