» Entertainment » News » Police arrest former NURTW chairman and a notorious assassin who he paid N1.5m to kill for him

Police arrest former NURTW chairman and a notorious assassin who he paid N1.5m to kill for him 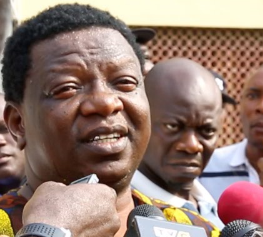 The police has arrested the former chairman of National Union of Road Transport Workers (NURTW), Rafiu Olohunwa Akanni, a notorious assassin, Adeola Williams a.k.a Ade lawyer and other suspects in the murder of Ganiyu Ayinla, a former member of the NURTW and personal assistant to Kunle Poly, Chairman NURTW, Idumota branch.

Ganiyu Aliyu was assassinated on 23rd January 2018 by gunmen who had been contracted to kill his boss, Kunle Poly, who fortunately escaped.

Speaking to the press, Commissioner of police, Imohimi Edgal said that after investigations carried out by the IGP intelligence Response team, led by ICP, Abba Kyari and the Technical Intelligence Unit of the Nigerian police, Mr. Adeola Williams, 39, an indigene of Isasi Village in Ijebu Ode Local Government Area of Ogun State who was said to have been on the most wanted list of the police for over five years was nabbed in his newly rented house in Akure, Ondo State.

During interrogations, he confessed that he was contracted by Mr. Rafiu Olohunwa Akanni, a former chairman of NURTW to kill Mr. Kunle Poly. He also revealed that they agreed on N1.5 million and he was paid N500,000 upfront.

After the operation, Adeola went back to collect the balance of N1million but Mr. Akanni refused to pay him stating that he didn't kill the target.

Mr. Adeola got angry and seized Hyundai Santafee SUV belonging to Mr. Akanni. He insisted that his balance is paid before he returns the SUV.

Speaking about his past victims, Adeola Williams confessed that he has been contracted to kill so many people including; Hamburger, an NURTW chairman in Oshodi.  Baba Jide Dosumu, aka Mados.

“I assassinated the popular Hamburger, an NURTW chairman in Oshodi. I also killed one Baba Jide Dosumu, aka Mados in Ebute Meta, Lagos. One Salawe in Ajah, Ganiyu Asaro and four others in Badore area of Lagos after I sprayed bullets into their car, killing all the five occupants.” He siad

0 Response to "Police arrest former NURTW chairman and a notorious assassin who he paid N1.5m to kill for him"