Men used to miss their steps looking at me during parade - Zone 2 police PRO, Dolapo Badmos 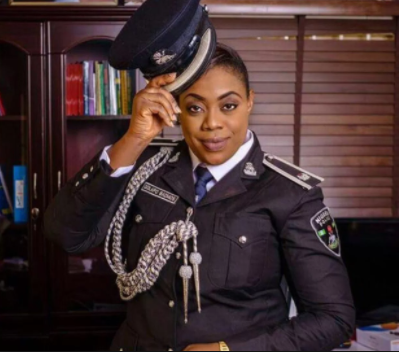 Police Zonal Public Relations Officer, Dolapo Badmos, in a recent interview with The Nation said, 'men used to miss their steps looking at me during parade'.

The pretty police officer who studied Accounting in school also spoke on why she almost dropped out of her police training course.

In her words, 'I remember while growing up, my mom used to tell me that I am beautiful, that I have big eye balls. My mates then used to talk about my big eye balls and when I got home, I used to report them to my mom. Instead my mom used to look at me alarmed that I had the best thing in the whole world. My mom made me to grow up knowing that I am a beautiful woman. This is a joke, but during those early days while I was at the Police Academy and during our parades, the men among us used to miss their steps because they were usually looking at me (she laughs at the memory)'.

She continued to say, 'when the instructor said move to the right, some of them would move to the left. I don’t want to mention their names because they are likely to read this. But I still make jest of them from time to time when we are all together. When men tell you that you are beautiful, how do you react, first as a police officer and then as a lady? Some people just say it as a compliment and nothing attached. When I see such people, I figure it out because I can sense sincerity when I see it. ‘Oh thank you’, is always my answer. But when I sense that there is more to the simple compliment, I easily ward off the person. I don’t fight anyone for having interest in me. I manage the situation. Some of them I immediately start calling them my uncle which tells them exactly what they are to me. When I am not in a police uniform and someone is overdoing a compliment, sometimes I just scare them by asking, ‘Can you handle a police officer?’’ And the next question they usually ask me is, ‘Are you a police officer for real?’ And then I will reply, ‘Yes, I am.’ And then the change of discussion. But some will tell you they don’t mind'.

0 Response to "Men used to miss their steps looking at me during parade - Zone 2 police PRO, Dolapo Badmos"