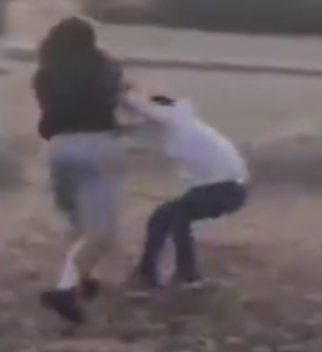 A 17-year-old football star in Booneville, Arkansas was caught on video brutally assaulting an autistic teen.

The football star, who is way bigger than his victim, is seen in the video punching his opponent on the head, tossing him around, and throwing him to the ground. People around them watched the attack and made no move to stop it, instead, they laughed in excitement, made several sounds and gave commentaries such as, "you are getting your a** beat".

At the end of the video, the bully got the autistic teen down to the ground and when the boy tried to get up, he used his booted foot to kick him so hard in the face. The sound of the kick was so loud that the observers screamed and it sent the boy's head banging on the ground.

The video is so painful to watch and it has generated so much outrage online, with people calling for the arrest of, not just the attacker, but also of the boys observing without putting an end to the attack.

Booneville police said they have the video and are investigating the fight, with charges expected to be laid very shortly. Police are asking witnesses with any further information to come forward.