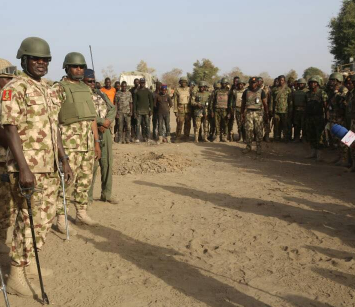 The Chief of Army Staff, Lt.-Gen. Tukur Buratai, has charged troops to capture Abubakar Shekau, the factional leader of the Boko Haram terrorists group, alive or dead. The Army Chief gave the charge when he paid a visit to Camp Zairo, the former Command and Control Centre of the terrorists group in the Sambisa forest yesterday February 17th.

“Let me say congratulations. But, we must move across to wherever this criminal – Shekau is and catch him red handed. I want you to get him. Mr President, Command-In-Chief of the Armed Forces says congratulations to all of you for recovering the Sambisa Forest. As far as we are concern, we have come to the end of this operation (clearing the forest of remnants of terrorists). What is remaining now is the Lake Chad waters only and we hope to do that (clear terrorists from it) also very soon. Meanwhile, you all know these criminals are still on the run; these guys are on the run, you must make sure that you get them wherever they are around this area. You must not allow them to escape. Every day, you must go on patrol, lay ambush for them and you go on raids. This is the time we have to consolidate and ensure that this place – Sambisa forest, is safe and never for these criminals to come back to it,’’ Buratai charged the troops''he said