» Entertainment » News » Former Attorney General of the federation, Mohammed Adoke to be arraigned on June 18

Former Attorney General of the federation, Mohammed Adoke to be arraigned on June 18 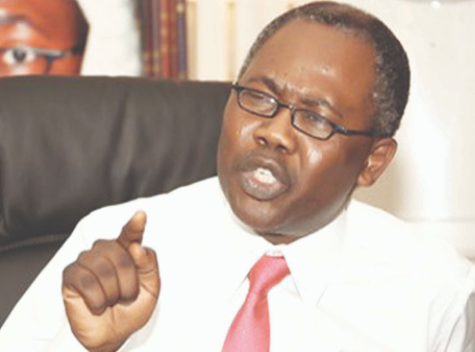 Justice John Tsoho of the Federal High Court, sitting in Maitama, Abuja, has adjourned to June 18, 2018 for the arraignment of a former Attorney General of the Federation (AGF) and Minister of Justice, Mohammed Adoke and eight others over their alleged involvement in the sale of Oil Prospecting License, OPL 245, also known as Malabu Oil.

The defendants are to be prosecuted by the Economic and Financial Crimes Commission, EFCC, for their allegedly complicity to defraud the Federal Government to the tune of $1.1billion in a suspicious oil block deal.

Specifically, Adoke was said to have played a major role in the fraudulent deal that saw to the transfer of ownership of Malabu Oil to two multinational oil companies – Shell Nigeria Exploration Production Company and Nigeria Agip Exploration Limited.

On April 3, 2017, the EFCC, through its counsel, Johnson Ojogbane, approached the court, requesting to be guided on whether or not to issue an arrest warrant against Adoke “as the former AGF and some of the defendants are residing outside the shores of Nigeria, making the service of writ of summons on them difficult.”

But, Justice Tsoho opined that “once a person has been arraigned before a court and is attempting to escape, then it becomes necessary to issue a warrant of arrest. But in this case, Adoke has not been arraigned; the matter is still being investigated.” The matter was later adjourned to June 13, but again, the arraignment could not hold due to the absence of Adoke in court. It was then adjourned to October 26, 2017. Subsequently, when the matter came up on October 26, 2017, Ojogbane informed the court that “the process of getting the defendants to appear in court to face arraignment has been very cumbersome”.

He further assured that “the process would be concluded very soon.”  The matter was then adjourned to today.  At the resumed sitting, Ojogbane, told the court that the Federal Government is still working hard to ensure the presence of the defendants in court, for their arraignment.  “Our journey so far has been tortuous and very cumbersome. The government continues to work to ensure their presence before this honourable court,” Ojogbane said.  He continued: “my lord, in the circumstances, we are asking my lord to graciously grant us a long adjournment to enable us continue the process of extradition which is ongoing. Peradventure we have the defendants before the long date; we will make an appropriate application to breach the time.”  The court granted Ojogbane’s prayer and adjourned.

Title : Former Attorney General of the federation, Mohammed Adoke to be arraigned on June 18
Description : Justice John Tsoho of the Federal High Court, sitting in Maitama, Abuja, has adjourned to June 18, 2018 for the arraignment of a former Att...
Rating : 5
Related Posts: Entertainment, News

0 Response to "Former Attorney General of the federation, Mohammed Adoke to be arraigned on June 18"