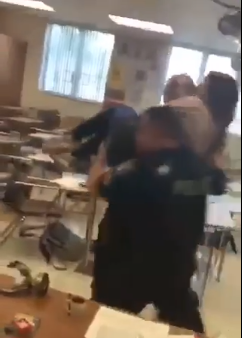 Another video has emerged from the tragic shooting which took place yesterday at Marjory Stoneman Douglas High School in Parkland, Florida leaving 17 dead.

In the video shot with a student's mobile phone, students are seen crying as SWAT team came into the classroom where they were hiding out, to rescue them. One male student is seen holding his arm and groaning in pain. It is believed he might have been shot.

A dead student is seen lying in a pool of blood. One female couldn't walk and had to be carried out by a uniformed personnel. Gunshots can still be heard at this point, causing students to be reluctant to flee with the SWAT team.

When the students eventually left their class and ran down the hall to safety, bodies of fallen teachers and students were seen lying on the floor of the hall. 17 students were killed and 50 were injured in the attack.

Watch the tear-jerking video below.