» Entertainment » News » Breaking: Domestic passenger plane with 66 on board crashes in central Iran

Breaking: Domestic passenger plane with 66 on board crashes in central Iran 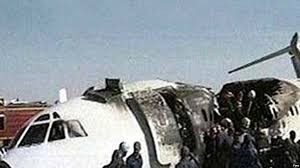 Iranian passenger plane with 66 people on board crashed in central Iran on Sunday February 18th during a flight from Tehran to the city of Yasuj in the southwest of the country, Iranian media reported.

Semirom's governor said rescue helicopters were unable to land in the crash site because of heavy fog and emergency workers were trying to reach the area by land.

State-run PressTV said 66 people were on board the plane, which disappeared from radar screens 50 minutes after taking off from Tehran's Mehrabad airport.

Mehrabad is located in western Tehran and mainly functions as a domestic airport, although it also serves some international routes.

Iran has suffered several plane crashes in the past few decades. Tehran says U.S. sanctions have long prevented it from buying new aircraft or spare parts from the West.

0 Response to "Breaking: Domestic passenger plane with 66 on board crashes in central Iran"