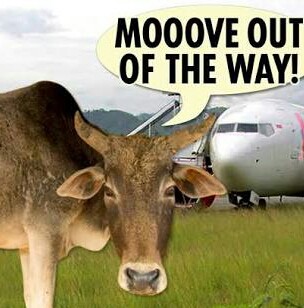 An Air Peace flight was unable to land at the Akure airport on Saturday because the runway was overrun by cattle.

The herd of cattle reportedly strayed onto the runway of Akure airport in Ondo state around 12pm, at about the same time flight P4 7002 was supposed to land, and airport officials were unprepared for it because it took them by surprise. It took the intervention of officials of the Federal Airports Authority of Nigeria (FAAN) and other security operatives to clear the runway for safe landing.

Gov Fayose talked about the incident on Twitter. Former Aviation Minister Femi Fani-Kayode also reported the same thing and said it might have cost the life of passengers. 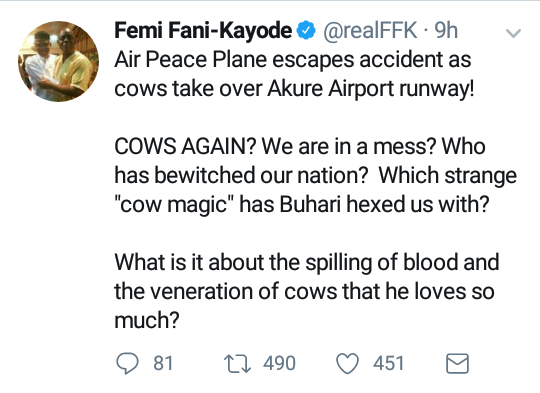 Chris Iwarah, spokesman of the airline, confirmed the incident in a statement.

“We confirm that flight P4 7002 from Lagos had to delay landing into Akure Airport today (Saturday) when the pilot-in-command sighted cows on the runway at about 12.15pm,” he said.

“On being alerted by control tower, aviation security personnel of the Federal Airports Authority of Nigeria (FAAN AVSEC) quickly intervened and cleared the runway.

“The flight was eventually cleared to land after about seven minutes. Our guests on board were all calm while the delay lasted. The aircraft departed for Lagos at about 1.06 with full escort from FAAN security personnel.”

The federal government through the Federal Airports Authority of Nigeria (FAAN) has apologised to Air Peace Airlines and its passengers following the incident.