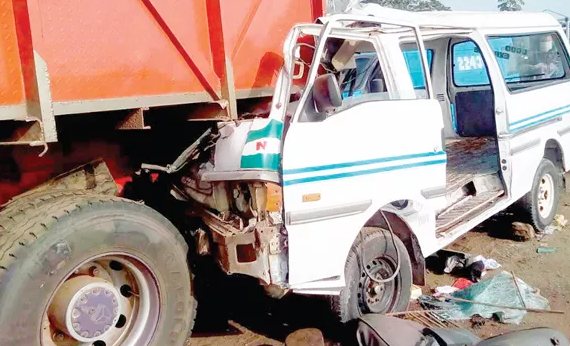 Tyopev said the trailer had break failure making the driver to lose control and the heavily loaded vehicle ran into five smaller vehicles at the scene. He explained that two persons died on the spot, while two others rushed to hospital, were later confirmed dead.

“A trailer carrying diesel to Bauchi ran into five vehicles and killed four persons at Mararaba Jama’a. Preliminary investigations indicated that the break of the vehicle failed and the driver who is alone in the vehicle lost control of it. It ran into five other vehicles parked within the vicinity. Two persons died on the spot and the two injured later died while receiving treatment at the hospital,” he said.

The police spokesperson said that the corpses of the deceased had been deposited at the mortuary in Ola Hospital, Zawan.

0 Response to "4 people killed, many injuredÂ as trailer rams intoÂ cars in Jos"